The day before yesterday, on 2 June 2021, Kosovo Sustainable Development Week (KSDW) continued with the second day of the conference that addressed the topic "Circular Economy - Sustainable Consumption and Production - Purification of air, water and soil" with 2 Discussion Panels.

Panel 1 “Medical waste management in Kosovo during the pandemic period" 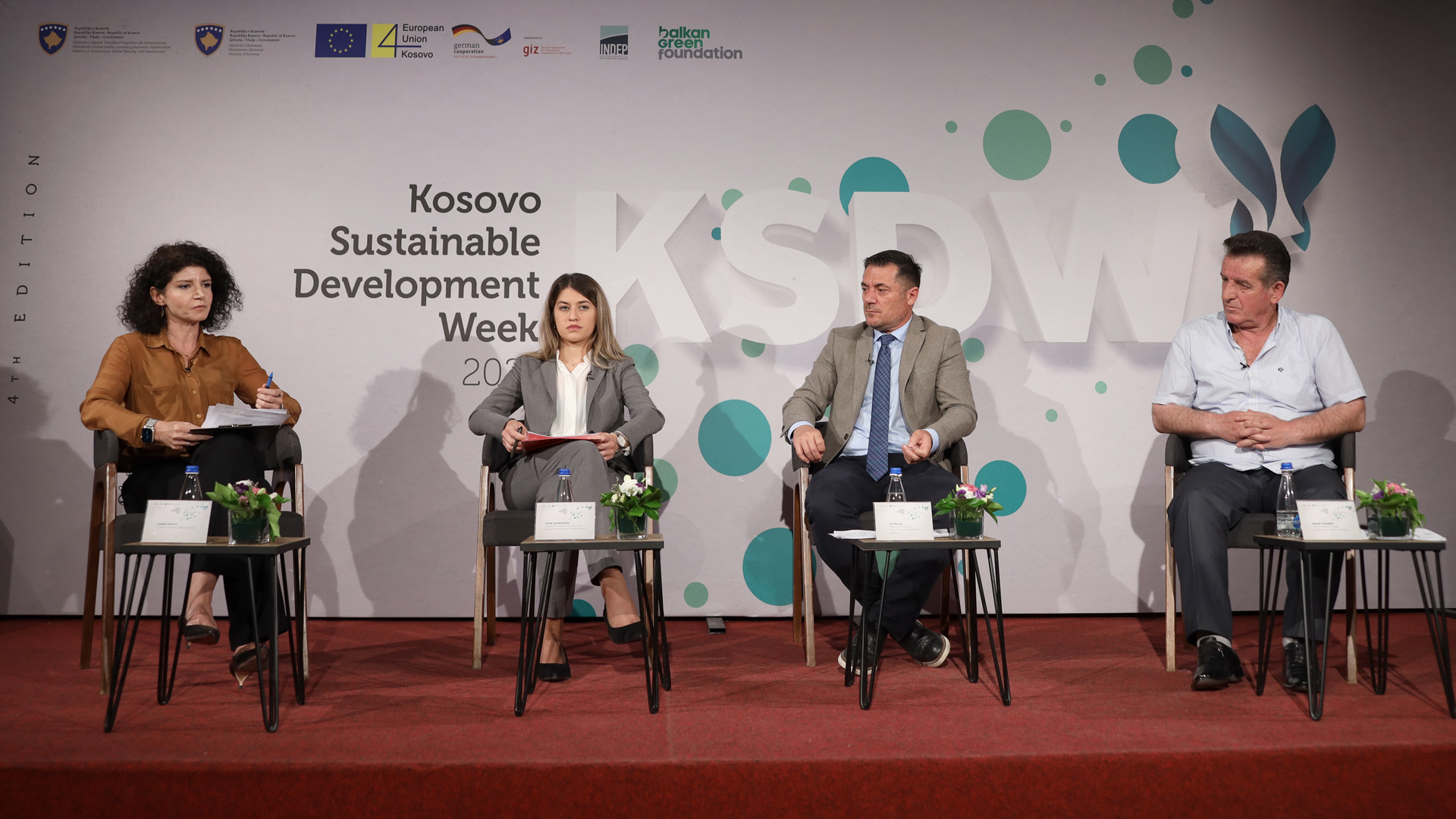 The first panel discussion was "Medical waste management in Kosovo during the pandemic period". The panel was attended by Deputy Minister of Environment, Spatial Planning and Infrastructure, Linda Çavdarbasha, the Director of the Environmental Protection Agency, Ilir Morina, and the Director of the Regional Waste Company in Peja, Nexhat Abdullahu. This panel was also attended virtually by the medical waste management expert, Dr. Heinz Eduardo Vest.Whereas the panel was facilitated by Rudina Qerimi, Spatial Planning Advisor at GIZ.In the introductory speech, Mrs. Qerimi stressed that 2020 has been a challenging year with great consequences and damage to both the economy and people. "Management of medical waste during the pandemic requires attention and commitment by the adequate institutions," said Ms. Qerimi.

Deputy Minister of MESPI, Mrs. Çavdarbasha said that the Ministry is a partner of this organization and that they are happy that sustainable development is having the attention. On behalf of the Ministry that she represents, she said the pandemic was the reason for the huge increase in medical waste. "The pandemic has found us without any facilities or warehouses for the collection of this waste. "Further Mrs. Çavdarbasha explained that the Ministry has taken steps in this direction. “MESP has built 7 plants throughout the country for sterilization of this waste. "So far, no waste incineration facility has been built that would eliminate up to 90% of waste and contribute to wellbeing for everyone", concluded the deputy Minister. Ilir Morina from KEPA in his speech said that in Kosovo a mechanism for waste separation was established in 2004, but this system was not used and the waste ended up collecting in water.

"According to the law, all public and private medical centers must accept medical waste, sterilize it and then report in different periods, in order for this data to be published at the national level," said Mr. Morina.

According to Mr. Abdullahu from the Regional Waste Management Company in Peja, medical waste management remains an issue, especially the training of human capacity to collect this waste. He said that the company he represents collects all waste, including medical ones, but appeals for extra care from citizens as 6 employees of his company have been infected as a result of infection from the infected syringes.

Mr. Vest, who joined virtually at the conference, said that in order to better understand the term medical waste, we need to clarify since there are several types of this waste. However, nonetheless, all waste becomes hazardous when they become infected with tools coming from infected diseases. According to Mr. Vest, "it is very important that this waste is separated at the source and that a lot of work has to be done in order to raise awareness among citizens about the danger that comes from medical waste."
The full video of this discussion can be found at the link below:
https://www.facebook.com/207179900007681/videos/139589198232315

The second panel addressed the topic of "Circular Economy: Economic Opportunities for Employment and Growth". The panel was facilitated by Indira Kartallozi, Executive Director of Sustainability Leadership Kosovo (SLK), whereas the panelists were: Liburn Aliu, Minister of Environment, Spatial Planning and Infrastructure, Astrit Panxha, from the Kosovo Manufacturing Club, Ariel Shabani, from KIVO Company, and was also attended virtually by Teodora Andreeva from the European Union Office in Kosovo.
Mrs. Kartallozi started the discussion panel with a summary of the situation with the circular economy, challenges and opportunities that this sector has in Kosovo. Since circular economy is not a new term, she recalled that circular economy has long been practiced with various practices. Minister Aliu said that previous institutions in Kosovo have not worked enough to raise public awareness in terms of the importance of the circular economy, therefore, the transition from a linear to a circular economy is a difficult process. Despite that, Mr. Aliu said that “Kosovo needs to build infrastructure which helps in recycling. Awareness and promotion of citizens towards recycling. The Ministry will draft an administrative instruction that will stop the large degradation of nature".

Virtually, Mrs. Andreeva said that one of the most important components is customer empowerment. "The current legislation should be aligned with the European legislation, in order to achieve the targets set by various agreements and the other partners from the Southwest Balkans must not be forgotten, who have already signed the Green Agenda, and one of the main components of this Agenda is the component of the circular economy. "According to Mrs. Andreevaa, working with customers and their active involvement in this process can result as a way of accelerating the integration of the circular economy into the economy to a great extent.

From the private sector, Mr. Shabani from the Kivo Company said that the biggest polluters in Kosovo are other factors - constructions, more than plastic bags. "In order to move from the use of plastic bags to paper bags, it should be intervened by the state through different mechanisms. We have producers who import waste from Northern Macedonia and neighboring countries for recycling, because in Kosovo it is difficult to have access to waste", explained Mr. Shabani about the difficulties his company faces until it reaches plastic recycling to produce recycled bags.

The full video of this discussion can be found at the link below: